I love visiting the Pilot Field, and generally I’m fond of visiting Hastings. This was a good afternoon, not too warm, and the football on show in this pre-season friendly between the K’s and hosts Hastings United was top notch for a middle-of-July game.

In 1948 and 1949, the Hastings Saxons was a speedway club that took part in the National League before what looks like huge crowds (local residents decided it was too noisy and ensured that the club died a premature death), just take a look at this action shot taken from Wikipedia. (CC BY 2.0 (https://creativecommons.org/licenses/by/2.0)], via Wikimedia Commons) 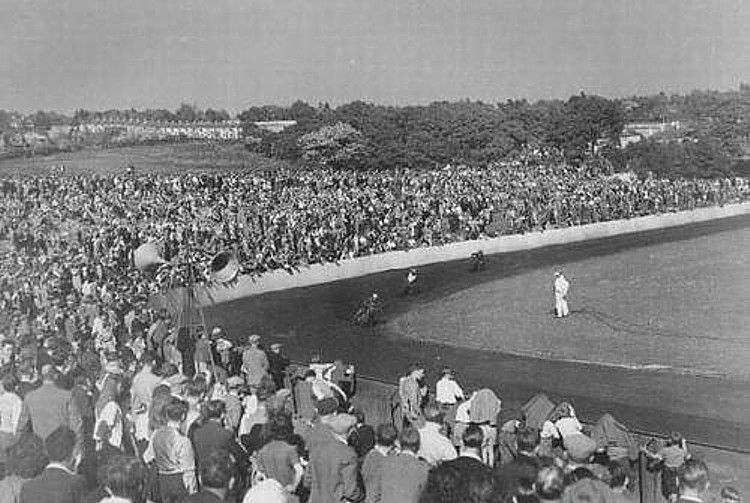 What remains of the speedway track is still there, but it doesn’t detract in any way from watching the football from the massive main stand (and in the prawn sandwich section they provide cushions, which are c-o-m-f-y!). It’s not like the Croydon Arena, where the athletics track makes it seem as if the football is miles away.

There’s been some heartbreak there for K’s fans, the 3-3 draw on the final day of the season in 2005 that prevented us from entering the Division One South play-offs comes to mind very quickly, but I always look forward to visiting the Pilot Field. Whilst I can’t tell you what an improper stadium is, I can say that the Pilot Field is a proper stadium, full of character like the Wessex Stadium last week in Weymouth, both fun to visit.

The game itself was, as I said, excellent. When going forward, Kingstonian look a joy at the moment, even only three games into pre-season. And the workrate was phenomenal, much gegenpressing à la Kloppo at Liverpool, which pleases me for more than one reason. It was a pity that we only scored the one goal, which came when Mo Faal’s cross was nodded home expertly by Elliott Buchanan. These two guys already look to be excellent signings, we knew some of what Mo could do with his vital contribution to our good end to last season and he’s such fun to watch. Elliott obviously knows what he is doing, and had he not gone off at half time thanks to a last ditch tackle that could easily have given us a penalty just before the break (the referee did not cover himself in glory at any time, I suppose match officials need a pre-season too to shake off any cobwebs), then we could easily have won the match.

However, Hastings look a potent outfit as well, plenty of speed in the team, we know what Daniel Ajakaiye can do, he has after-burners on his after-burners, and the home team’s quickness proved problematic for our defenders, but, apart from one loss of concentration with ten minutes to go, the back four did really well. Even our trialists looked quite good, no idea who they were but it would be nice to see them again.

I’m not a fan at all of team sheets with the word “trialist” on it, but there must be a reason for it. In my time at K’s we had never done it before, maybe “forgotten” to name a player who suddenly comes on to the pitch, but never before in my time have we had anyone from the Trialist family. No worries, maybe they’re guys that we don’t want other teams to know that we’re looking at them, maybe there’s another reason, it’s not a big deal and I trust our manager. I might call our two from yesterday Ilia Kuriakin and Napoleon Solo and show my age…

I’m still excited by what I am seeing at the moment from the K’s. And the good news is that I have no clue as to what our best eleven could be, because there’s already competition for places in every position except goalkeeper (not many, if any, goalkeepers are better than Rob Tolfrey in our division). The passing at times looked sumptuous, as I said the work-rate was outstanding, the defence was challenged hard throughout the game by a rather good Hastings team and only once was found wanting. South Park on Tuesday will be another good test, Leigh Dynan has picked some good and competitive friendlies this summer, and whoever gets into that starting eleven against Brightlingsea Regent will have earned it.

Anyway, I’m droning on now. Time to order a pizza. Which brings a dilemma – stuffed crust or no stuffed crust? The latter, I think, but it’s a long time between now and when I order in about ten minutes time…

This site uses Akismet to reduce spam. Learn how your comment data is processed.